I had to get this off my chest. I doubt anyone reads this blog after all this time, but putting it out there helps me, so I am.

You know, when this political primary race started, I didn’t have a negative opinion of Hilary Clinton. I didn’t think badly of her when I voted for Barack Obama over her, but I just thought he’d be more progressive than she’d been so I voted for him. That proved not to be the case (he’s quite conservative as we’ve seen though still probably less so than Hilary) but I haven’t regretted my decision. Obama was Mr. 5% change, but that’s better than nothing, I suppose.

So I didn’t particularly have anything against Hilary this time around, I thought she’d be a fine candidate.

But I knew Bernie would be a better one.

Unfortunately, Ms. Clinton has succeeded in making me utterly LOATHE her because of the lies, the cheating, the dirty, underhanded tactics she’s used against this honest and forthright man. Bernie Sanders is possibly the only legitimately HONEST man left in Congress – and that BITCH has the nerve to trash HIM? Unbelievable. I seriously had nothing against her before this, but I can not stomach the unsubtle lies, the utter contempt she has for the electorate, the hubris with which she treats this contest and the completely biased mass media anointment she’s received. Do you know she’s got a paid army of trolls called ‘Correct the Record’ who are going around making shit up about Bernie? Why are they so threatened by him? And what MORON thought that trashing Bernie and crapping on his supporters would get them to support her in November? Newsflash, Hilary, it won’t. It’s just about the most surefire way to insure they won’t. Sorry to break it to you, but the person on your staff who told you they would was a Trump supporter.

I would have thought a bit of humility might be called for when it’s clear that nearly HALF of your base wants someone else. That half your party wants policies that are more progressive than what you propose, but does she consider that, maybe, she should look to including a bit of progressivism in her platform? No, she basically thinks that the progressives, whom she only treats with contempt, have no other choice and must vote for her. Wrong. We have other parties in this contest. Green Party is a very viable alternative, so is writing in a candidate’s name. “B e r n i e S a n d e r s” is easy to spell right, honey.

I am SICK of the pile-on of the mainstream media as they work themselves into a frenzy trashing Bernie. The more they trash him, with laughably disprovable claims, the stronger my support for him grows. The bias was clear from the start, but now it’s even clear to those who aren’t its victims. She’s desperate and lashing out with personal attacks at a guy who has only ever countered her with policy differences. And there were plenty of complaints and legitimate attacks he could have made and didn’t. He’s been a gentleman, acted with admirable restraint, and held back what he could have said right from the start - and she’s treated him contemptibly for it.

My vote was hers to lose and she did a spectacular job of doing it. I will be writing in Bernie’s name even if it’s not on the ballot.

They say official confirmation won't come for a couple of weeks, but I think there is enough of a buffer there to absorb any error. The old record was something like 40,000 trees. One team on this jaunt broke that by itself. ;) The total of all teams this try came out to something like 200,000 trees! I only planted 68 (and that was hard in that soil, believe me!) but they say every little bit counts. :)

So I was heading home Friday when, on my way out of my timber sale, I spotted some guys I knew from the Game Commission. Seems they were out trapping bears and there was one in a trap on the same road I was on. They let me, my intern and our technician (three women foresters working together - not a common event in such a male dominated profession!) watch while they tagged and vetted a very sheepish looking bear. Here are some photos - I hope you like them! I put them in as thumbnails to keep this post from being as image heavy as the last one. Just click the image to be taken to my photobucket page. I'm afraid my previous post I posted from my phone and there aren't too many controls on that app so the pictures in it were HUGE. Eeek!( Collapse )

Today, at 1, we and the folks from the Sustainable Forestry Initiative are trying to break a world record for the most trees planted in one hour.  We're one of 30 crews across the US and Canada who are trying to break this record.  We'll each get 50 trees and need to get them in the ground before the hour is over.  It's doable, though the soil up here at this old strip mine in Moshannon State Forest is hard as a rock!  Might take a bit of elbow grease to get them all in the ground by the time limit.  Wish me luck!

My little greenhouse is getting more and more like a real greenhouse these days!  I put insulation and heat in it over the winter and now I've installed this nifty little fan!  And yes, there was ZERO male help involved in this production!

The garden (at least the main one) is planted and the first crop of lettuce is being harvested.  Ariel is a very happy gardener.  :)</p>

This is just blowing my mind. http://wnep.com/2015/04/11/husband-taken-into-custody-in-missing-woman-case/

This is the town I work in. They found her in a state forest picnic area that I have to drive through almost every day. I know these places intimately. I just can't even...

From her house to the store is no more than a 3 block walk along the main street that I drive every workday. She supposedly 'disappeared' around 6 in the evening, and these days that's while it's still light out. We were on standby (I'm one of the district's search and rescue personnel) in case they wanted to search the woods, but the searches were mainly along the West Branch of the Susquehanna River. I do have my scuba license, but those are jobs for younger folk than me!

The really freaky thing is we all knew the victim and murderer (alleged) to some degree because it is a really small town - seriously, there can't be more than 4000 people living there. Everyone had a theory. I was pretty sure she was dead, but you never expect someone you know, no matter how slightly, to be a murderer. It wasn't that he was an upstanding citizen - he'd been in trouble for stealing in the past, so I'd heard - but this is a way bigger deal.

I just can't wrap my head around this.

For all intents and purposes, the greenhouse is now done! Yeah!

I took Monday off so that I could finish getting the panels in. They went together remarkably easily and now I am in the process of caulking the joints to make them water/airtight. It’s a LOVELY little thing.

Just a quick note to show today's progress. Unfortunately, I found one small piece is missing (which I thought we had when I opened the box!) so I might have to hold off finishing things for a bit. Meanwhile, I'm going to reexamine what parts are left to make sure I didn't misplace something else important. Eeek!

Well, I got a couple of nice things under the tree, hubby got me a stand for my tablet so I can watch it hands free.  It's the ultimate in couch potato luxury!  Daughter got me a throw with my delicious Tomoe from Kamisama Hajimemashita on it.  Yum!

But the best present I got was the day off the state gave me to  work on the greenhouse!  I got the solar panels on their little platform over the railing off the porch and today I bought the wood to finish up the raised platform for my greenhouse.  Got the platform insulated,  sealed in plastic and then decked. 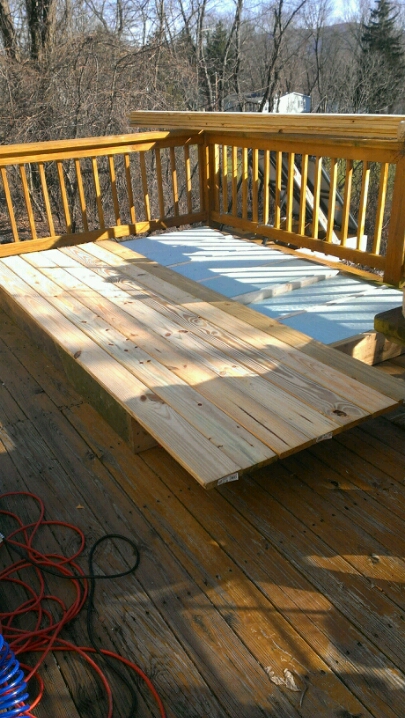 It was a very pretty thing when finished.  The platform matches what's on the deck already and looks lots better than the OSB I was considering for a top.  I also got to try out the nail gun my husband got a few years ago and never used.  It made nailing the deck go MUCH quicker. 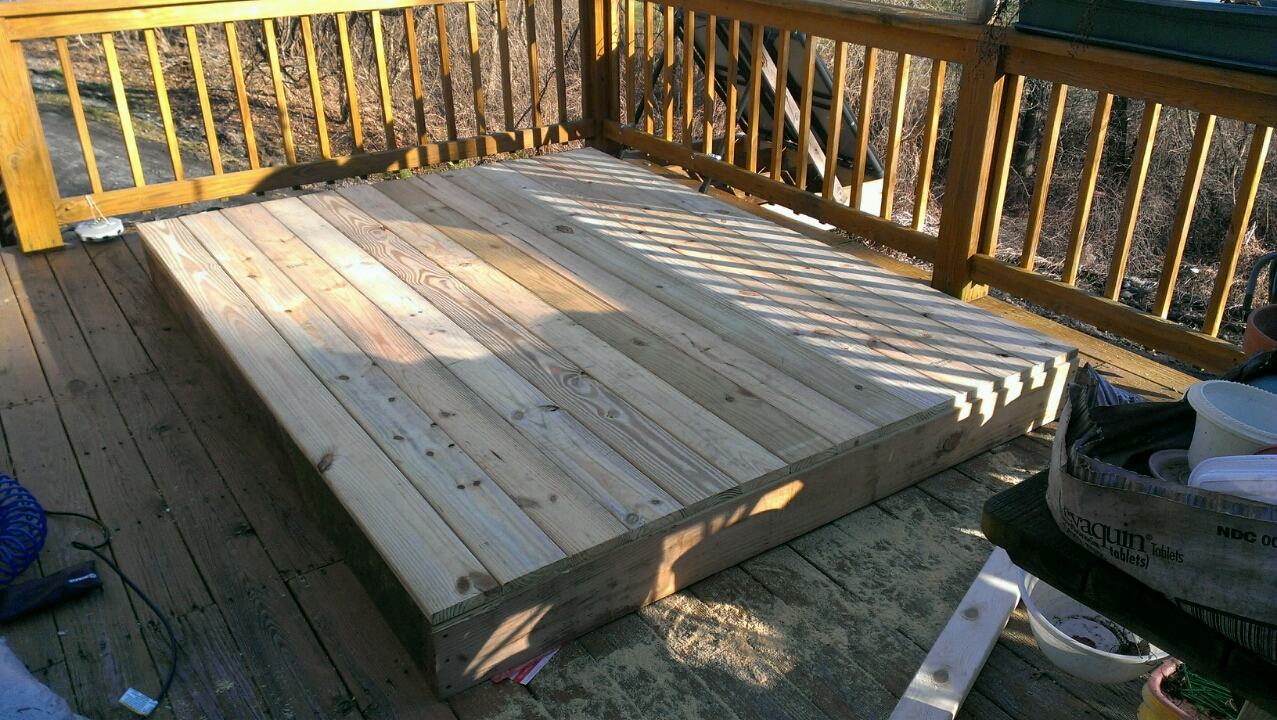 After a little confusion over the way the greenhouse frame went together, I finally figured it out and was off and running!  Time caught me up so I'm not quite done, but I'm very pleased with the progress so far. 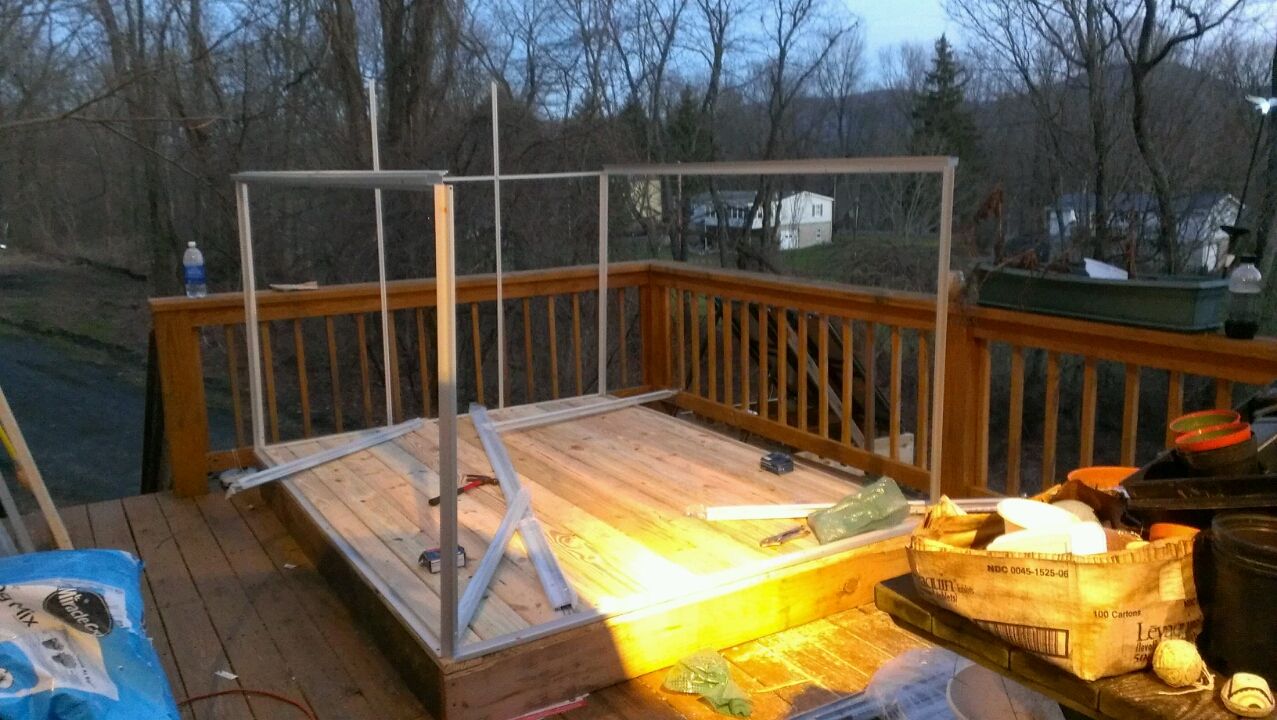 We're supposed to have just as nice weather tomorrow so I'm hoping to get much further along with the structure.  So far, I've been able to do it all myself, but the directions suggest getting two assistants to get the roof beams up.  Good thing I have two kids.  ;)

Hope your Holiday was just as satisfying!